“A Tale of Ten Prospects; from the first UK onshore to the present day”

This presentation will take place in the Royal Cambrian Academy, Conwy.

Refreshments will be available from 6:00 pm.

Stephen Corfield is a consultant based in Staffordshire. He graduated in 1986 with an Earth Sciences degree from Oxford Polytechnic and subsequently gained a PhD from the University of Keele on the structure and basin evolution of the North Staffordshire coalfield.

This was followed by post-doctoral research from 1991-194 at the University of Manchester funded by Conoco during which time he set up the department’s first 3D seismic interpretation workstation.

He worked at Robertsons’s from 1994 to 2001 which included four years of commuting to Norway to consult for Norsk Hydro.

In 2001, he returned to Manchester to set up a Norsk Hydro funded 3D seismic lab with a small team of researchers.

Since 2003, he has been a consultant working mainly for Norsk Hydro (now Statoil) in Bergen and London and Foster Findlay Associates in Aberdeen.

Although the first offshore exploration wells in the UK were drilled in the 1960’s, the story of UK onshore exploration goes back much further to the days of the First World War. This first phase of oil exploration from 1918-22 has been relatively undocumented and has been overshadowed by the later activities of the D’Arcy Exploration Company (subsequently BP) from the late 1930’s onwards.

The purpose of this talk is to redress the balance and take a look at the ten prospects drilled and their history to the present day.

The talk will will review the structures and wells drilled using data from the 1920’s plus more recent seismic data and conclude with a comment on the recently completed licensing round. 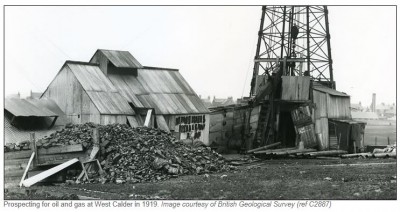 This entry was posted in Cluster Meetings. Bookmark the permalink.