The Southern Margin of the Harlech Dome – Igneous Intrusions and Lavas Erupted on the Sea Bed, But Now at 2900ft. 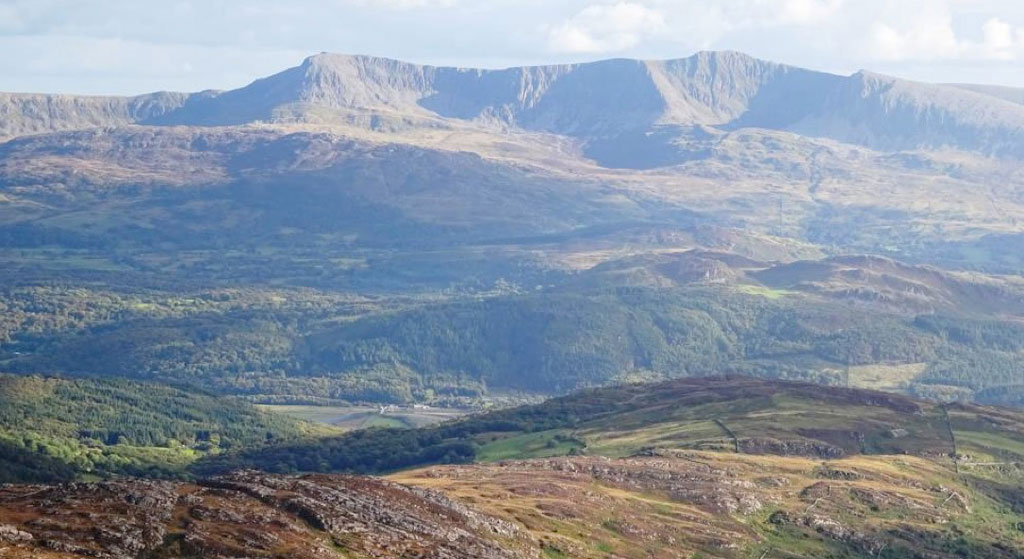 Looking south to Cadair Idris (2928ft/893m) from Diffwys (2462ft/750m), the southernmost peak of the Harlech Dome area. The rocks in the foreground are the familiar Cambrian age grits and sandstones of the Rhinog and Barmouth Grit Formations, which clearly dip southwards here, as they form the southern flank of the Harlech Dome, and descend beneath the Barmouth Estuary. This means that all the rocks of the Cadair Idris Range, across the valley, must be younger and were deposited later. This is indeed the case, with the lower slopes of Cadair Idris formed by later Cambrian sedimentary rocks, followed by parts of the Tremadoc age Rhobell Volcanic Group, which we saw in the previous page. These are overlain by the even younger, Llanvirn to Early Caradoc age, Offrwm, Llyn y Gafr, Pen y Gadair and Craig Cau Volcanic Formations of the ‘Aran Volcanic Group’, which are also intruded by a thick microgranite ‘sill’ which now forms Cadair Idris’s summit cliffs. However, unlike the Rhobell Volcanic Group, most of these volcanic rocks erupted underwater, as proved by the presence of interbedded marine mudstones and basaltic ‘pillow lavas’ just southwest of the summit of Cadair Idris. These pillow lavas were originally erupted onto the Ordovician sea bed, but now lie at an altitude of around 2800ft/850m; clearly an excellent example of the enormous amount of tectonic uplift Snowdonia has experienced since the Ordovician!