Photo 1. The mountains of Snowdonia, North Wales. The sharp, pointed summits of Snowdonia form the highest mountains in Wales at the present day. The foreground ridge of Crib Goch, and the summit of Snowdon itself in the background, are mostly composed of tilted and folded layers of ‘extrusive’ volcanic ash, basaltic lavas and interbedded sedimentary rocks of the Lower Rhyolitic Tuff, Bedded Pyroclastic and Upper Rhyolitic Tuff formations (see close up view of some of these rocks in Photo 2). These volcanic rocks were erupted onto an ‘ancient’ Welsh landscape, and into the surrounding seas, from a chain of volcanoes that were active during the Caradoc epoch of the ‘Ordovician period’, around 450 million years ago. However, ‘Wales’ as we know it today, did not exist at this time in its present day location, high in northern latitudes. During ‘Ordovician times’ the section of ‘continental crust’ on which Wales was located lay thousands of miles away, in the Earth’s southern hemisphere, and formed part of a volcanically active ‘continental margin terrane,’ perhaps similar to the western, ‘Andean margin’ of South America today in Chile, Peru or Bolivia.
The steep, almost vertical rock faces at the left hand end of Crib Goch ridge are formed by a fine grained ‘intrusive igneous rock’ (a rhyolite) which was injected upwards into the surrounding rocks as a molten ‘magma body’, which then cooled and solidified within the ‘host rocks’ at a later stage. In several places, other ‘intrusive igneous’ rocks such as granite or dolerite, and white ‘veins’ of quartz (see Photo 3) can also be found. These rocks and quartz veins also represent the solidified remains of molten ‘magma’ bodies and hot, ‘super heated’ mineral rich fluids that were injected into the surrounding rocks in Ordovician times, but cooled and solidified within the volcano, before they could reach the Earth’s surface.
Most of the rocks we see in Snowdonia today were probably only revealed at the Earth’s surface by much later periods of uplift and erosion, during the ‘Mesozoic’ and ‘Tertiary’ periods of geological time, when much of western Britain was tilted and uplifted by the rifting and splitting apart of the Earth’s crust to form the modern day Atlantic Ocean. Being relatively hard and resistant, with few bedding planes or fractures, the volcanic rocks of Snowdonia tend to form the mountain peaks and ridges, whereas the softer interbeds of sedimentary rocks tend to form valleys and cols (e.g. Photo 4). However, the sharply sculpted ridge forms and deep, U-shaped valleys that we see in Snowdonia today were actually formed even later, by mountain glaciers during the Pleistocene ‘Ice Ages’ of the Quaternary period, during the last 2 million years of the Earth’s history.

The recently published Geoscience Wales Calendar was produced to illustrate and describe some of Wales’s most spectacular and beautiful natural landscapes and explain how a wide range of geological and geomorphological processes have created these landscapes over a time period of more than 600 million years. However, due to limitations of space on the calendar itself we could not do full justice to this fascinating subject. As a result, we have also included some additional material here on the Geoscience Wales website for interested readers. As there are many other fascinating aspects of Welsh geology that we have not had space to describe in this year’s calendar, it is hoped that we shall continue the story in subsequent calendars!

Introduction: (The Front and Back Pages of This Year’s Calendar)

Despite its relatively small geographical area of just 8000 square miles (around 21,000 sq. km.) the Principality of Wales contains a huge diversity of beautiful and spectacular landscapes, from the rugged, glacier carved mountains and valleys of Snowdonia and the Brecon Beacons, to the long, sweeping beaches and secluded coves of Pembrokeshire, the Gower, Anglesey and the Lleyn Peninsula. The scenic beauty and ecological value of many of these stunning landscapes has now been protected by the establishment of several National Parks such as those of Snowdonia, the Brecon Beacons and Pembrokeshire, and by several other designated ‘Areas of Outstanding Natural Beauty’, such as the Clwydian Hills range, in north-east Wales.

However, in addition to this wide variety of stunningly beautiful natural landscapes Wales has also been fortunate enough to be blessed with an abundance of natural resources, such as coal, slate, copper, limestone, lead and gold, the exploitation of which has contributed enormously not only to Wales’s industrial wealth as a nation, but also to its rich and unique cultural heritage. These resources include the well known and extensively mined deposits of coal, iron ore, clay and sandstone which lay beneath the ‘Welsh Valleys’ of South Wales and in the smaller Wrexham coal field in the northeast. The tremendously deep slate quarries and slate mines of North Wales, Mid-Wales and Pembrokeshire form a stark reminder today of how mineralogically rich and industrialised much of rural Wales was in the 18th, 19th and early 20th Centuries, when the extraction of millions of tonnes of slate provided employment for thousands of workers and their families over a period of several centuries. The development and expansion of these mining industries also eventually led to the construction of an extensive rail network and port system. The location and growth of many Welsh towns and cities, such as the ports of Cardiff, Swansea and Barry, and the slate mining towns of Llanberis and Bethesda, was largely a result of the exploitation and transport of these mineral resources both to local markets, and to many other markets worldwide.

In more recent times, the discovery and exploitation of another ‘natural resource,’ the oil and gas reserves discovered beneath the Irish Sea, just off the North Wales coast, has contributed to the ongoing development of a relatively new industry in North Wales, the petroleum geology industry, which has resulted in the setting up of several specialist geoscience companies in the area, including Geoscience Wales Ltd., which is based in the small North Wales coastal town of Conwy.

The concentration of such a wide variety of spectacular natural landscapes and abundant mineral resources within the relatively small geographical area of Wales perhaps raises the following questions: where did all this mineral wealth come from? Why was there so much coal in South Wales, but not in Mid-Wales? Why are the mountains of North Wales so sharp and rugged, whilst the mountains of much of mid-Wales and South Wales tend to be flat topped and form more plateau like features? How were these mountains and rugged coastlines created, and when did the events that created them take place? 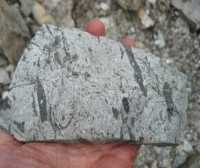 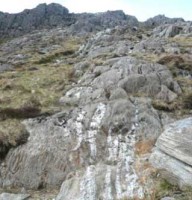 The content of each month from the Geoscience Wales Wall Calendar will be presented here in web format to give you an idea of what is available in the published calendar. The layout will be different to that in the printed calendar, but the message will be the same. Come back at the beginning of each month to see what’s new.