In Tertiary times (65 -1.8 million years ago) the continuing processes of largely east-west oriented North Atlantic rifting and associated basin subsidence, meant that most of the offshore basins in western Britain were still receiving and preserving sediments, although in some areas the effects of northward directed compression from the Alpine/Pyrenean Orogeny also resulted in some uplift, inversion and erosion in these basins.

However, most of the present day land area of Wales appears to have experienced continued uplift and tilting during this period, and only sporadic occurrences of Tertiary age rocks are preserved on-shore in Wales today. These include the intrusion of mainly sub-vertical, igneous, dolerite dykes in north-west Wales, which largely appear to radiate away from the early Tertiary volcanic centre of the Mountains of Mourne in Northern Ireland. The periodic uplift of the land surface, combined with fluctuating sea levels resulted in the cutting of extensive ‘marine erosion surfaces’ at several different levels across much of Wales, some of which appear to have been quite well preserved as uplifted ‘planation surfaces’, especially across Pembrokeshire in South Wales.

Photo 38, shows part of this ‘truncated’ Pembrokeshire landscape near Whitesands Bay on the St. David’s peninsula, with probable ‘residual islands’ of harder igneous rocks, which resisted erosion, preserved in the rugged hills of the St. David’s peninsula in the foreground and on Ramsey Island in the distance. The landscape on Page 10 of the Calendar also shows a similarly peneplaned land surface continuing away to the north-west, into inland Pembrokeshire. 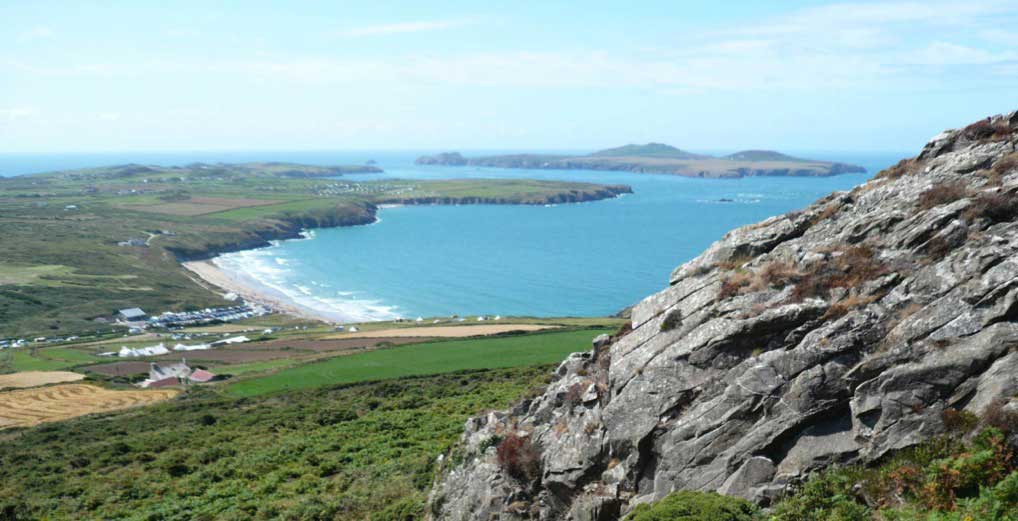 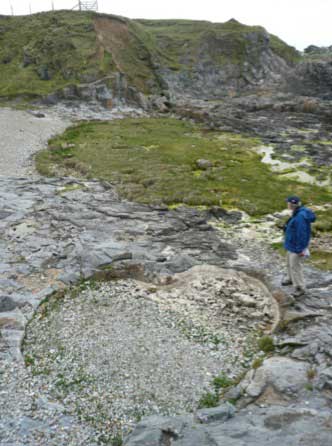 Photo 39. Pothole fills of probable Miocene age at Trwyn y Parc, near Cemaes Bay, northern Anglesey. One of these is the heart shaped basin in the foreground, below the geologist’s feet, whilst a second pothole can be seen in section in the low cliff line beneath the fence on the horizon. This second pothole is seen in more detail in Photo 40, right.

In North Wales there also appears to have been local preservation of ‘Late Tertiary landscapes’, as Miocene ‘sediment fills’ within potholes excavated by surface waters in Carboniferous limestones and other rocks, as along the north coast of Anglesey. Photos 39 and 40 show some of these Miocene pothole fills in much older Gwna Melange rocks at Trwyn y Parc, near Cemaes Bay in northern Anglesey. Other Late Tertiary sediment fills are thought to have been preserved in parts of southern Pembrokeshire, though the exact dating of these has proved controversial. 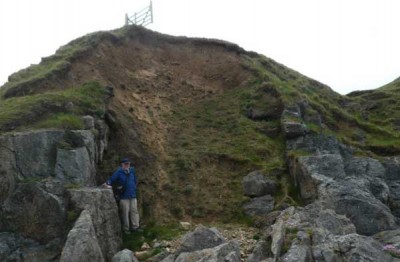 Photo 40. Close up view of the second Miocene age pothole fill at Trwyn y Parc, near Cemaes Bay, northern Anglesey. This pothole is probably about 6 metres deep and is eroded down into limestones of the much older Gwna Melange Formation.

Although the climate of Wales was still largely tropical or warm temperate in Wales throughout most of the Tertiary Period, the continental crust of Wales, along with most of Western Europe continued to drift progressively northwards throughout Tertiary times. By the Late Tertiary, this northward drift, and other changes in global climate patterns began to result in cooler conditions in Wales and through most of the rest of the World. By the end of the Tertiary Period, around two million years ago, this cooling of the global climate would have dramatic consequences for the landscape of Wales, and for the evolution of humans!