Introduction – The Geology and Landscape of North East Wales,

Photo 1. Looking south-east along the western cliffs of the Great Orme peninsula, Llandudno.  The massive, light coloured limestone cliffs above the road are formed by the Great Orme Limestone, shallow marine ‘carbonate’ sediments of Lower Carboniferous age. They were deposited as carbonate reefs built up along the southern shoreline of what was then the Craven/Irish Sea Basin, a tropical seaway which stretched west to east across northern England around 350 million years ago. However, the rolling hills of the Denbigh Moors, on the distant left hand skyline, are composed of much older ‘clastic’ sediments; consisting of interbedded mudstones, siltstones and sandstones, that were deposited in a deeper marine basin setting during the Silurian Period, around 430 million years ago. On the right hand skyline the much higher and more rugged mountains of Snowdonia are formed by even older rocks, mainly volcanic ash and lavas deposited by a chain of volcanoes which formed a volcanic arc, similar to that of Japan, across north Wales in Ordovician times, around 450 million years ago.

In the 2014 Geoscience Wales Calendar we told the fascinating story of the geological evolution of the whole of Wales, tracing its history as it moved across the globe, with the rest of southern Britain and Ireland, as part of the so called Avalonian ‘micro-continent.’ As part of this much larger section of continental crust, or ‘tectonic plate’ we saw how Wales endured phases of crustal rifting, oceanic subduction and continental collision, producing volcanic eruptions and mountain building. However, it also enjoyed periods of relatively tranquil sediment deposition in both deep marine basin and shallower shelf settings over a period of more than 500 million years. In the 2015 calendar we focussed specifically on one of the most ‘active’ geological time periods in Wales, the Ordovician period, when one of the most spectacular and famous landscapes of North Wales, the mountains of Snowdonia, was formed by the outpouring of huge volumes of volcanic ash and lava during just a few relatively short stages of the Ordovician period, around 450 million years ago.

In this year’s calendar we take a closer look at another area of North Wales (see map below which lies just to the east of Snowdonia; the Denbigh Moors, Clwydian Hills and North Wales coast. This area has no particularly high or rugged mountains, like those of Snowdonia, and much of it is located largely inland, although it does form the backdrop to the popular North Wales coastal resorts of Rhyl, Prestatyn Colwyn Bay and Llandudno. However, the observant traveller who looks inland, or takes the time to explore further, will see not only some of the most spectacular coastal cliffs and hills in Wales, but also some of Britain’s most interesting geology. This diverse and beautiful region, coincidentally, also tells the continuing story of the geological evolution of North Wales, after the Ordovician volcanoes had subsided. This is a story of turbidites and tectonics, coral reefs and huge river deltas.

Photo 2. Looking eastwards along the North Wales coast from the steep Carboniferous limestone hill of Mynydd Pant, above Penrhyn Bay. The villages of Penrhyn Bay, Rhos-on-sea and Colwyn Bay lie along the coastline nearest the viewer. The steep coastal hills in the middle distance are also largely formed from Carboniferous reef and platform limestones. However, the more distant hills further inland, and along the skyline are the Denbigh Moors and Clwydian Range, respectively. The Clwydian Hills were formed by an uplifted block or ‘horst’ of older Silurian rocks, although their northern and eastern slopes also consist of Lower Carboniferous age reef, platform and deeper water limestones, which dipped north and eastwards into what were then the deeper marine waters of the Craven/Irish Sea Basin, which lay to the north in Early Carboniferous times, off the North Wales coast. 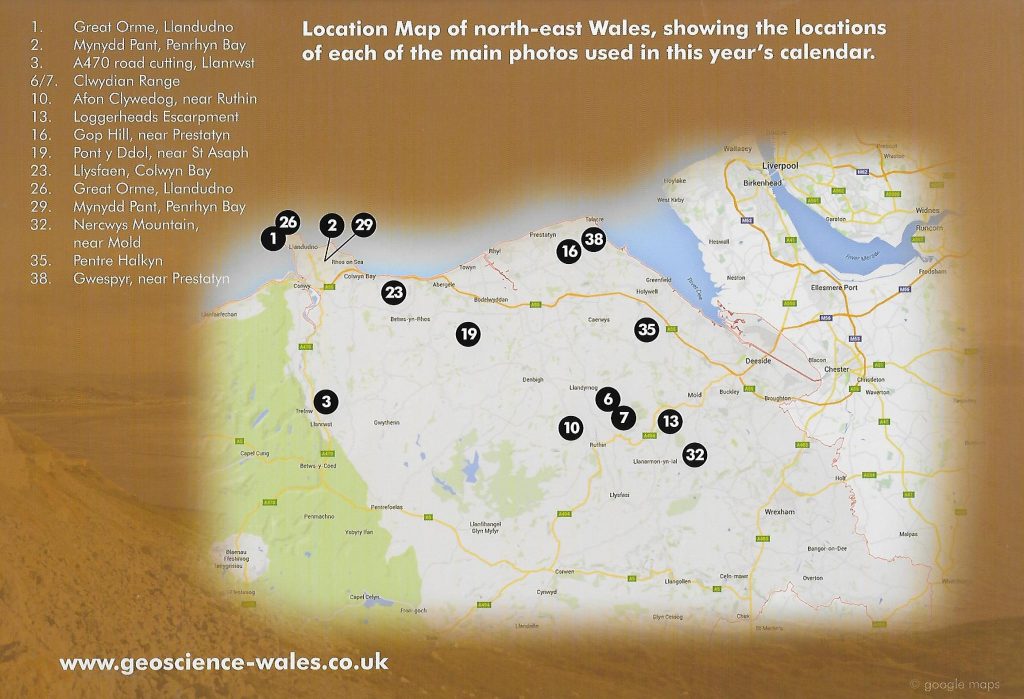 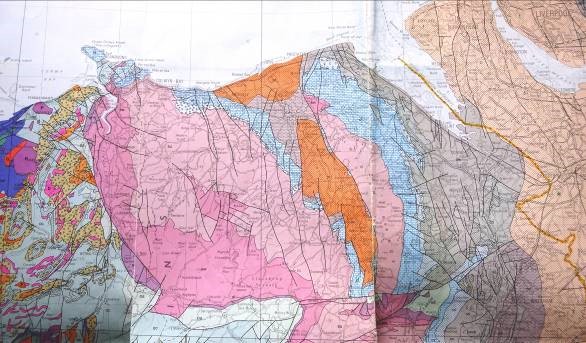 This geological map illustrates the key geological features of the region. In the south-west lie the Ordovician volcanics and interbedded marine sediments (red/green) of the uplifted Snowdonia Massif, sharply truncated on its north-eastern margin by the Conwy Valley Fault. This fault down-throws to the east, and probably formed the active western margin of the ‘Denbigh Trough,’ supplying thick sequences of mud, silt and sand turbidites to this subsiding deep marine basin during the Llandovery, Wenlock and Ludlow epochs of the Silurian period (dark, medium and light pink, respectively). This area now forms the uplifted and folded rocks of the Denbigh Moors. To the north and east a ring of Lower Carboniferous limestones (blue) formed fringing reefs and platform carbonates on the north-eastern margin of Wales during Early Carboniferous times, falling away into deeper water mudstones of the Craven/Irish Sea basin to the north. To the east the Clwyd Valley and Cheshire Plain are both rift basin ‘half grabens,’ opened by east-west ‘Atlantic margin’ extension in Permian-Jurassic times, and are filled with Carboniferous and Permo-Triassic (orange) rocks. They are separated by the uplifted ‘horst’ of the Clwydian Range, also composed of Silurian age turbidites, (pink) with faulted Lower Carboniferous limestones (blue) of the Loggerheads-Halkyn Mountain area and Namurian age sands, silts, muds and cherts (brown) and Westphalian age coal measures of the Flintshire Coalfield (grey).

Figure 3. SW-NE x-section across the Denbigh Moors showing the Silurian mudstone, siltstone and sandstone turbidites (pinks) which filled the subsiding Denbigh Trough. These rocks were subsequently folded, faulted and uplifted in the Late Silurian to mid-Devonian ‘Acadian’ and end Carboniferous ‘Hercynian’ Orogenies, and also in the Late Mesozoic to Early Tertiary phase of extension associated with the opening of the North Atlantic Ocean and Irish Sea basins.