The Silurian geological period, which was also named by geologists after an ancient Celtic tribe, lasted from 443 to 416 million years ago. This period saw the continuing north-westward movement of the ‘Avalonian micro-continent,’ the section of underlying continental crust containing present day Wales, southern England, parts of northern France and Belgium, and sections of modern day eastern North America.

Avalonia became separated from Gondwana, probably in the Early Ordovician Period, by extension and rifting of the intervening continental crust, leading to the creation of a second ocean, the ‘Rheic Ocean,’ to the south-east of Avalonia. However, Avalonia was still separated from the rest of a pre- existing paleo-North American continent to the north-west (which geologists call ‘Laurentia’) by the remaining part of the intervening Iapetus Ocean.

Towards the end of the Ordovician Period Avalonia seems to have eventually over-ridden the central ‘mid-ocean ridge’ of the Iapetus Ocean (which had been generating its underlying ‘oceanic crust’) and the south-eastward subduction of this Iapetus Ocean crust beneath Avalonia appears to have largely ceased. As a result, the source of the magma which had been generating the volcanoes in the Lower Palaeozoic Welsh Basin was switched off and the Ordovician volcanism and back-arc basin rifting largely stopped. As a consequence by late Ordovician to Early Silurian times the ‘Welsh Basin’ stopped subsiding and began to be in-filled by large influxes of originally shallow marine, and often land derived, sandstones and poorly sorted ‘greywacke’ sediments, which were transported further into the deeper parts of the basin by sub-marine turbidity currents, from the adjacent landmasses to the south, east and north-west.

Eventually, by the late Silurian Period, the Welsh Basin was almost full of sediments, and by this time the continental margins of Avalonia in the south-east and Laurentia, to the north-west, were beginning to converge, as the intervening Iapetus Ocean closed and most of its oceanic crust disappeared down ‘subduction zones’ along their respective over-riding continental margins. As the two continents collided in the Late Silurian to Mid-Devonian both continental margins, including the Welsh Basin, most of north-west England, south-east Ireland, western Scandinavia and the north-east coast of America, were crumpled and deformed in the ‘Acadian’ phase of the Caledonian Orogeny.

Photo 16. Steeply tilted Silurian aged ‘turbidite’ sediments in a quarry near Newtown, Central Wales. These sediments consist of multiple units of pale cream to yellow sandstone deposited by submarine avalanches of sediment which billowed out across the floor of the Welsh Basin from Cambrian to Late Silurian times. In between these avalanches of sandy sediment, derived originally from the adjacent land areas, the ‘background’ sediments of dark grey, finer grained marine silts and muds continued to be deposited. These form the thinner, softer interbeds between the thick sandstones. The whole sequence has since been tilted, folded and uplifted above sea level by the mid-Devonian Caledonian Orogeny.

As a result of this continental collision, the thick sedimentary fill of the Welsh Basin fill was compressed, folded, faulted and uplifted above sea level, and the originally submarine sediments of the Welsh Basin now dominate most of upland central Wales, forming much of the high moorland and hills of mid-Wales (for example, see Photo 16, showing steeply tilted Silurian aged ‘turbidite’ sediments in a quarry near Newtown, Central Wales). The thick sequences of originally marine sediments are now also particularly well exposed by coastal erosion in the magnificent coastal cliffs of western Wales, from Llangranog in the south-west to Aberystwyth and Borth in the north-east (see Photos 17 and 18, respectively) and also in the Denbigh Moors area of north- east Wales. 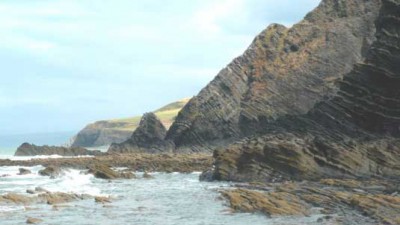 Photo 17. Silurian turbidites on the west Wales coast, near Aberystwyth. These turbidite sequences tend to have thinner sandstone interbeds than those in Photo 16, above, because they were deposited further away from the source of sandy sediment and are therefore predominantly composed of siltstones and mudstones, with only thin sandstones interbeds. 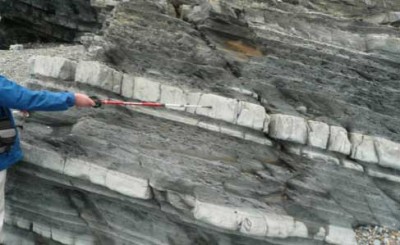 Photo 18. A close up view of Silurian turbidite sequences a few kilometres to the north of Aberystwyth, near the small coastal town of Borth. This sequence is also dominated by grey siltstones and mudstones, with less frequent and thinner interbeds of sandstone. This indicates that these turbidite sequences are also probably further away from the source of sandy sediment.