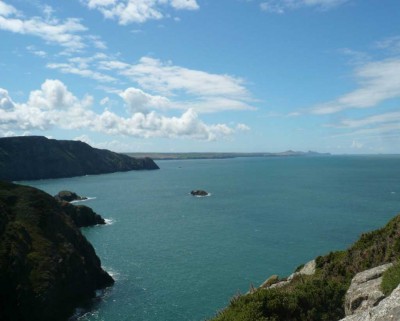 Photo 37. Looking out to sea from near Pwll Deri, just south of Strumble Head, north Pembrokeshire. Uplift of the land surface of most of Wales in the Late Mesozoic and Tertiary probably eroded away any Cretaceous rocks that were deposited on land, so today we have to look out to sea to find them, buried beneath the waters of the Bristol Channel and Celtic Sea. The strikingly flat landscape in the distance is probably a marine erosion surface cut across Pembrokeshire in the Tertiary period, as explained on the next page.

The extension and subsidence of off-shore basins to the south and west of Wales seems to have continued in the Late Mesozoic in relation to the ongoing stretching and rifting of the crust of north-western Europe associated with the opening of the North Atlantic Ocean. As part of this process much of northern and western Britain may have experienced domal uplift and erosion in the Cretaceous period, eventually leading to extensive Early Tertiary volcanism in western Scotland, Northern Ireland and possibly on Lundy Island in the Bristol Channel.

Eventually, progressive, south-to-north opening of the North Atlantic Ocean occurred further to the west of Ireland and Scotland in the early Tertiary period, but much of north- western Britain seems to have remained elevated above sea level for most of the Cretaceous and Tertiary periods.

As in much of the Permian, Triassic and Jurassic periods, during the Cretaceous Period (145-65 million years ago) most of central Wales appears to have remained above sea level, probably as an uplifted plateau area, and may never have received any Cretaceous sediments (although this is still a subject of much debate). However, some Cretaceous sediments may have been deposited initially in parts of Wales, as shallow marine Cretaceous rocks are widely distributed in south-eastern England and have been proved in some of the marine basins offshore from South Wales, but if they were ever deposited on land in Wales there is now no longer any trace of them.

Seismic surveys and drilling for oil and gas in the last few decades has revealed that terrestrial sediments, shallow marine chalks and other Cretaceous age sediments, were deposited and preserved in the deeper parts of the Bristol Channel and Northern and Southern Celtic Sea Basins, to the south and south-west of Wales respectively.

Towards the end of the Cretaceous Period and into the Tertiary, the early stages of Alpine compression, folding, faulting and uplift also began to affect southern Britain, as North Africa and Iberia once more began to move northwards against southern Europe, pushing up the Alps and Pyrenees in the Alpine Orogeny. These events may have been another reason why Cretaceous sediments are now no longer preserved on land in Wales. As a result, we have to look out to sea today, from the southern and south-western peninsulas of Wales (as in Photo 37) in order to ‘see’ Cretaceous rocks, where they are still preserved in the Bristol Channel and North and South Celtic Sea basins.