During the Jurassic period (199-145 million years ago) global sea levels continued to rise, probably due to a warming global climate with little or no major ice sheets at the poles. In addition, the crustal rifting, extension and subsidence of the continental crust of the North Atlantic region, which had commenced in the Permian and Triassic periods continued to cause subsidence of the off-shore structural basins around Wales, including the Bristol Channel and South Celtic Sea basins to the south, the St. George’s Channel and Cardigan Bay basins to the west and the East Irish Sea basin off the North Wales coast.

However, most of northern and central Wales appears to have remained as an uplifted and exposed land area at this time, probably as a relic of the earlier ‘Wales- Brabant landmass’ (and possibly also due to continuing ‘rift-margin uplift’ associated with the crustal rifting and adjacent basin subsidence). Consequently, there are now no known Jurassic age deposits preserved on land within North or mid-Wales, although early Jurassic sediments are preserved in the southern Cheshire Basin, to the south of Whitchurch.

In South Wales, continued basin subsidence, and gradually rising sea levels led to the deposition of thick sequences of interbedded ‘marginal’ and deeper marine limestones and shales in warm tropical seas, as Wales was now located at around 30 to 40 degrees north of the Equator. These rocks have since been uplifted, folded and faulted by later compressional forces, probably due to the ‘Alpine Orogeny’ of the Late Cretaceous and Tertiary Periods. They are now spectacularly exposed in the sheer cliffs of South Wales, along the Glamorgan coast between Southerndown and Penarth.

 Photo 34. Spectacular cliffs formed by the thinly interbedded limestones and shales of the Jurassic Blue Lias Formation, looking south-east towards Nash Point from the cliff side lookout point in Dunraven Park, near Southerndown, South Wales. The flat outcrops of rock on the beach are a good example of a wave cut platform, which clearly shows the erosive power of the sea.

Photo 34 shows the thinly interbedded limestones and shales of the Jurassic age Blue Lias Formation in the cliffs above Dunraven Bay, just to the east of Southerndown. Photos 35 and 36 show the surprisingly common large Jurassic ammonite fossils found in the thick limestone beds of the foreshore at Seamouth Bay, and spectacular folding in interbedded Jurassic limestones and shales in the cliffs above, respectively. 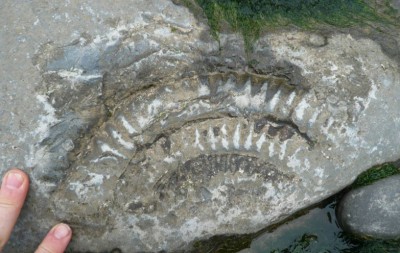 Photo 35. A large ammonite impression in the smooth Jurassic limestone slabs on the foreshore of Seamouth Bay, near Southerndown, South Wales. 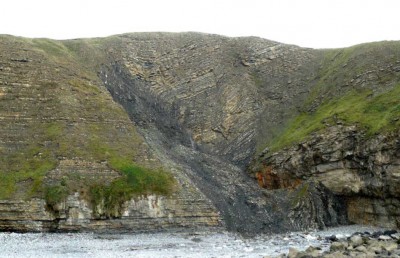 Photo 36. Spectacular folding and faulting in thinly interbedded limestones and shales of the Blue Lias Formation, Seamouth Bay, near Southerndown, South Wales. These folds were probably caused by the Alpine Orogeny which produced south to north compression structures across much of southern England and locally in South Wales.