Photo 22. The impressive Lower Carboniferous limestone cliffs of Eglwyseg Rocks, near Llangollen, north-east Wales. These shallow marine reef limestones were deposited around the north- eastern margin of the Wales-Brabant massif, which formed an uplifted landmass across mid-Wales after the Caledonian Orogeny. Gradually, as this landmass shed clastic sediments (sands, silts and muds) northwards and eastwards into the Bowland Basin, these sediments prograded and aggraded over the earlier Carboniferous Limestones to form the thick beds of the so called Namurian ‘Millstone Grit’ facies in north-east Wales.

The Carboniferous period extends from 359 to 299 million years ago. It is one of the most important geological periods in Wales, and in Britain as a whole, from an economic and scenic perspective, as it is during this period that both the massive limestones in the coastal cliffs of North Wales and South Pembrokeshire, and the thick coal deposits of the South Wales and Wrexham coalfields, were laid down. The older, Lower Carboniferous limestones also form the impressive escarpment of Eglwyseg Rocks, near Llangollen (see main photo, Photo 22, right).

As the Carboniferous period was so important to the geological story of Wales, and was so influential on its economic development and in creating so much of its wonderful scenery, its story is spread over two pages here.

In Early Carboniferous (‘Dinantian’) times Avalonia, including the underlying crust Wales was now amalgamated with and was part of the much larger Laurentian ‘super-continent’, and lay within tropical latitudes. The northern shore of the Rheic Ocean ran more or less east-west, somewhere close to the South Wales coast, whilst the Gondwanan super-continent lay even further away to the south- east, across this now much wider ocean basin.

To the north, along the North Wales coast, a series of east-west oriented marine basins (the ‘Bowland, or Craven Basin’) accumulated shallow water limestones around their southern margins, producing thick carbonate reefs which now form the sheer cliffs on the northern coast of Anglesey, from Llandudno eastwards to Abergele, and also south-eastwards down the Clwyd valley and Clwydian hills to Llangollen and Oswestry. Further north, deeper marine sands, silts and muds accumulated further off-shore from the North Wales coast. Some of these mudstones (e.g. the ‘Holywell Shale’) were rich in organic material, and are thought to provide the source material for the gas and oil reserves now exploited in the East Irish Sea Basin.

However, much of central Wales was still above sea level at this time, as a relict of the folding and uplift produced by the Caledonian Orogeny, and formed part of an east-west oriented land mass, called the ‘Wales-Brabant’ massif. In the Mid- to Late Carboniferous Dinantian and Namurian Epochs this landmass shed sediment both northwards and southwards, eventually forming sandstone, siltstone and mudstone deposits in rivers, deltas and shallow marine environments along the north and south coasts of Wales, and in north-east Wales. These deposits eventually prograded over the earlier limestone reefs to form the so called ‘Millstone Grit’ facies of the ‘Namurian’ Epoch. They are now well exposed in the coastal cliffs of south-eastern Pembrokeshire (e.g. west of Pendine Sands, see Photo 23, below), and also around the rim of the South Wales coalfield, and in north-east Wales, where they underlie the Wrexham coalfield. 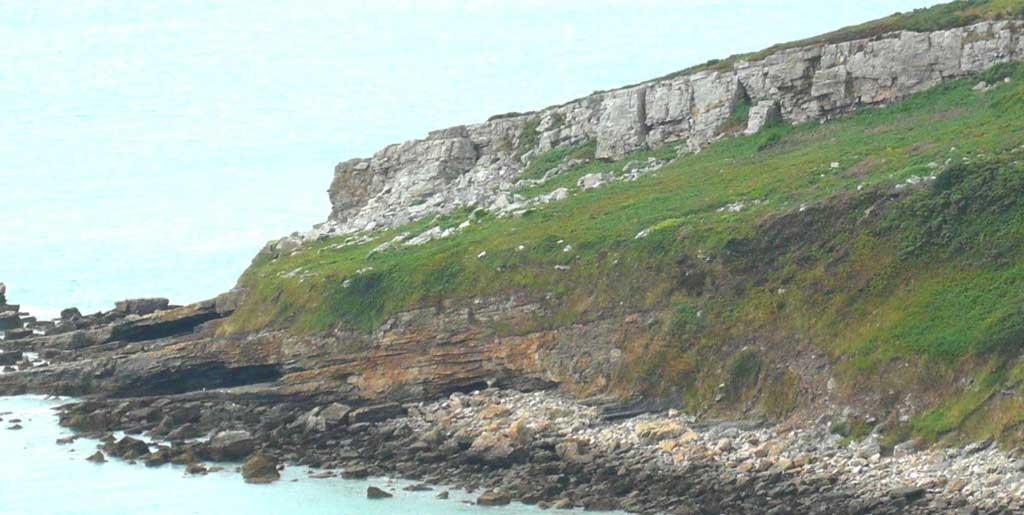 Photo 23. Sandstone dominated ‘Millstone Grit’ facies of the mid-Carboniferous ‘Namurian’ Epoch exposed in the coastal cliffs of Ragwen Point, south-eastern Pembrokeshire, just to the west of the small coastal resort of Pendine Sands. These rocks were originally deposited sub-horizontally in river deltas and shoreline systems, but were tilted and folded in the end Carboniferous to Early Permian Hercynian/Armorican Orogeny, which deformed the rocks of much of South Wales.

Later in the Carboniferous period, in the Late Namurian to ‘Westphalian Epochs’, clastic sediments continued to accumulate around the margins of the Wales-Brabant landmass, and ‘prograded’ outwards into the marine basins to the north and south, eventually filling them with sediment to form low lying ‘delta top’ and coastal plain landscapes, similar to the Amazon and Mississippi deltas of today.

These environments were ideal for the continuous growth of thick tropical forests, marshes and swamps in the tropical climate, but they were periodically flooded either by further inputs of river-borne sediments, or sometimes more widely, by influxes of the sea, which may have been rising and falling at regular intervals at this time, due to the ‘waxing’ and ‘waning’ of a large ice cap on the Southern Hemisphere continent of Gondwana. In addition, the delta deposits themselves probably continually collapsed and subsided below sea-level due to compaction of the sediments under their own weight, and the expulsion of water from within the sediment pile.

The interaction of these processes resulted in thick, repetitive sequences of coal (formed by the partially decayed and compacted forests) shales and siltstones (formed from the marsh, lake and marine deposits) and sandstone (formed by the fluvial, deltaic and shallow marine sands). Today, these sediments form the thick multi-storey interbeds of coal, sandstone, shale, ironstone and clay of the South Wales and Pembrokeshire coalfields (see Photos 24 and 25, of Namurian-Westphalian sands, silts, shales and thin coal beds at Telpyn Point and Monkstone Beach, respectively, just along the coast to the east and south of Saundersfoot). 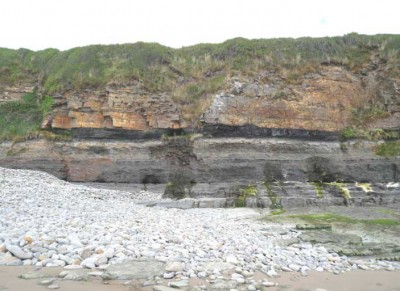 Photo 24. Namurian-Westphalian age sands, silts, shales and thin coals at Telpyn Point, between Amroth and Pendine, south Pembrokeshire coast. These sedimentary rocks represent the deposits of river deltas and coal swamps which were laid down along the south coast of the Wales-Brabant landmass which lay across much of mid- Wales in Carboniferous times. 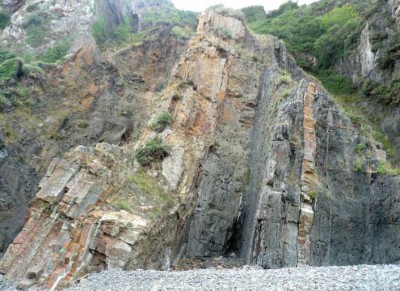  Photo 25. Steeply dipping layers of Namurian to Westphalian age sandstones, siltstones and shales at Monkstone Beach, between Saundersfoot and Tenby, south Pembrokeshire. As in the previous photo, these sediments were originally laid down sub-horizontally in fluvio-deltaic to shallow marine environments on the southern margin of the Wales-Brabant landmass, but they were uplifted and folded to almost vertical orientations by the Late Carboniferous to Early Permian Hercynian/ Armorican Orogeny, produced by the collision of the Gondwanan and Laurentian continents.

Towards the end of the Carboniferous Period, the Rheic Ocean to the south of Wales, began to close as the continent of Gondwana (containing most of modern day Africa) continued moving northwards, and eventually collided with southern Europe to form the ‘Armorican/Variscan’ or ‘Hercynian’ Mountains which ran almost east-west across central Europe, through western France, and across Devon and Cornwall into southern Ireland. The rocks of South Wales were most strongly affected by this continental collision (as they were closer to it) and dramatic folding, faulting and uplift occurred in southern Pembrokeshire, in the Gower Peninsula and in the South Wales coalfield, as can be seen in the accompanying photographs (Photos 26 and 27, above right; Carboniferous rocks steeply tilted, folded and faulted on Saundersfoot Beach, and in the famous ‘Ladies Cave Anticline’, also just south of Saundersfoot). North and north- east Wales was also affected, although to a lesser degree (as it was more distant) with some folding and faulting of the rocks in Anglesey, the Great Orme and Abergele areas of North Wales, and near Llangollen. 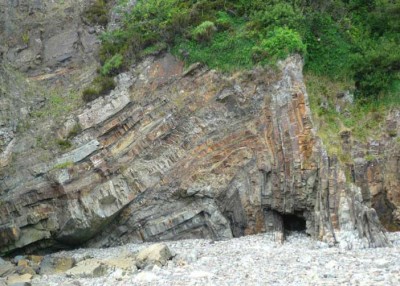 Photo 26. Mid- to Late Carboniferous Namurian to Westphalian age sedimentary rocks consisting of interbedded sandstones, siltstones and mudstones which have been steeply tilted, folded and faulted on Saundersfoot Beach, south Pembrokeshire. Here the folding associated with the Hercynian Orogeny has been so intense that the rock units have been locally shattered to form ‘disharmonic folds’ and brecciated fault planes. 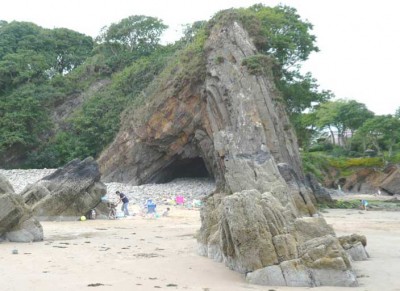 Photo 27. The famous ‘Ladies Cave Anticline’, also just south of Saundersfoot. This structure is formed from more homogeneous, thick beds of sandstone which were still steeply folded by the Hercynian Orogeny, but managed to retain some of their original structural integrity on either limb of the main fold axis, which lies at the top of the structure.