The Precambrian period is the first, and therefore the oldest, period of geological time on the ‘Geological Time Scale.’ It contains rocks which have been dated at more than 542 million years (Ma.) old. Precambrian age rocks are therefore the oldest rocks in Wales, and are some of the oldest rocks in the World (though in other parts of the World, including north west Scotland, they can be over 3000 million years old!). Today, Precambrian rocks in Wales are only exposed at ‘outcrop’ in a small number of scattered locations: on the island of Anglesey, in adjacent parts of mainland north-west Wales near Caernarvon and Bangor, on the Lleyn Peninsula, in the Pembrokeshire peninsula, and locally along narrow ‘fault zones’ in the Welsh Borders. In the rest of Wales they probably still exist at depth, but remain buried beneath thick deposits of younger rocks which were laid down later, in subsequent periods of geological time. Because of their limited and widely scattered distribution, varied lithology and only rare preservation of sometimes ‘enigmatic’ fossils, Precambrian rocks have often proved difficult to date accurately, and the location and ‘paleo-geography’ of Wales in Precambrian times is therefore also difficult to piece together accurately. However, geologists have examined the rocks which are exposed at the surface, and have also locally managed to penetrate other deeply buried Precambrian rocks at depth (by drilling) and have come up with some ideas about the possible location and geological setting of Wales at this time. 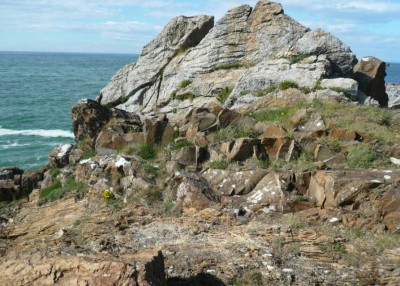 Photo 5. The Gwna Melange rocks of the Llanbadrig Peninsula, northern Anglesey. A probable ‘accretionary wedge complex’ of sediments and fragments of oceanic crust accreted onto the margin of north-west Wales during the Late Precambrian to Early Cambrian.

In Photo 5, right, The Gwna ‘Melange’ rocks of the Llanbadrig Peninsula in north-western Anglesey, may represent the earliest, scraped-off remains of parts of the crust of an ancient pre-existing ocean, the Iapetus Ocean, which was probably being ‘subducted’ south-eastwards beneath the adjacent edge of the continental crust of the North Wales mainland, during Late Precambrian and Early Cambrian times, from about 600-500 million years ago. They are now thought to represent part of an ‘accretionary wedge complex’ of mixed up ‘submarine avalanche’ sediments which were deposited along the margins of the ancient Welsh landmass, which at this time lay far to the south of its present day location, and formed part of a pre-existing ‘Gondwanan super-continent’ in the Southern Hemisphere.

The second photograph, Photo 6, below, also shows Precambrian age rocks, but these are mainly igneous rocks, including gabbros, dolerites and granites which were intruded into the Hanter, Stanner and Old Radnor hills in the Welsh Borders, near the small town of Kington. These rocks probably represent the ancient cores of volcanoes that originally formed an ‘island-arc’ system off the north- western coast of the Gondwanan continent in the Late Precambrian period. This island arc is believed to have been rafted towards, and then collided with and ‘accreted’ onto, the north-western continental margin of Gondwana slightly later, by ‘plate-tectonic’ processes of subduction and ‘terrane accretion.’

Photo 6. Looking north-eastwards along the Hanter, Stanner and Old Radnor Hills near the small town of Kington in the Welsh Borders.
These rugged hills are mainly composed of Precambrian age gabbros, dolerites and granites formed as part of an ‘island arc complex’ which was accreted onto the margin of the ancient land mass of the Gondwana ‘super-continent’ during late Precambrian to Early Cambrian times, around 600-500 million years ago. Their relatively steep sided, rugged shapes, compared to the smoother, more rounded adjacent hills, is largely due to the relatively hard, resistant nature of these igneous rocks, compared to the mainly younger, softer sedimentary rocks which form the surrounding hills on the skyline.
However, the relatively linear, north east-south west orientation of many of the hills and valleys in this part of Wales is actually a result of later folding and faulting of the rocks along deep seated pre-existing basement fractures during the Caledonian and Hercynian/Armorican Orogenies, when the continental crust beneath southern England and Wales was pushed north-westwards against southern Scotland and northern Ireland.
Finally, these hills were probably uplifted again and tilted slightly towards the southeast in late Mesozoic and Tertiary times, as Western Britain was rifted apart by the opening of the North Atlantic Ocean. It was this uplift, and the associated erosion by rivers, and locally by valley glaciers in the Pleistocene Ice Ages, which formed the final, more rugged shapes of these resistant hills.