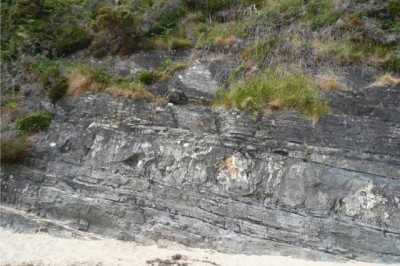 Photo 7. Cambrian sediments exposed in a coastal section just south of the small seaside resort of Borth y Gest, near Porthmadog, north-west Wales. These sediments now lie on the northern margin of the Harlech Dome and consist of multiple layers of quartzose sandstone, siltstone and silty mudstone (the Ffestiniog Flags formation) which were originally laid down as periodic avalanches of submarine ‘turbidites’ which flowed out across the seabed of the Lower Palaeozoic Welsh Basin, during much of Cambrian, Ordovician and Silurian times.

Like the even older Precambrian rocks, Cambrian rocks are now only exposed at the surface in Wales in relatively small areas, as in most of the rest of Wales and in England they have also largely been buried beneath younger rocks laid down in later geological periods. Again, as with rocks of the Precambrian period, Cambrian rocks have only been revealed in areas where later uplift and erosion, or movement along deeply penetrating and long lasting fault zones, has exposed them at the surface. These uplifted areas include the largest area of Cambrian rocks exposed in Wales today, in the ‘Harlech Dome’ structure of north-west Wales, but they also occur across much of Anglesey and in the adjacent foothills of Snowdonia, near Bangor and Caernarvon, which have also probably experienced several episodes of post-Cambrian tectonic uplift. They also outcrop in low lying ridges and form many of the rugged peninsulas along parts of the coast of western Pembrokeshire, and in small exposures in the Shropshire/Welsh Borders area; areas which are also known to have experienced later uplift, folding and faulting. But when did this uplift, folding and faulting occur, and why only in certain locations? 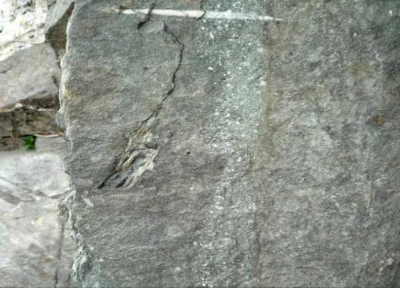 Photo 8. Greywacke ‘grits’ near Barmouth. These rocks are composed of coarse grained, poorly sorted sandstones, laid down by submarine turbidite currents in the Lower Palaeozoic Welsh Basin which stretched across Wales in Cambrian to Silurian times, but they are now tilted almost vertically by later folding and faulting on the southern margin of the Harlech Dome structure of north-west Wales.

In Cambrian times, coarse grained sediments, including sands and gravels, began to be deposited as sub-marine fans and ‘turbidite systems’ within a developing ‘Lower Palaeozoic Welsh Basin’ which was forming close to the north- western margin of the Gondwana super-continent, at relatively high latitudes in the Southern Hemisphere. This basin was probably forming as a result of tectonic extension and subsidence within this part of the Earth’s crust in a so called ‘back- arc basin’ setting. However, though these sediments were originally deposited in ‘submarine basin’ environments they now form thick terraces of ‘grits’ and ‘greywackes’ high up in the Rhinog Mountains of the Harlech Dome area (see Photo 7, of Cambrian sediments taken near Porthmadog, and Photo 8, of greywacke ‘grits’ near Barmouth). They were uplifted to their present location, well above sea level, much later, during the Late Silurian to mid-Devonian ‘Acadian’ phase of the Caledonian Orogeny, although tectonic activity was already occurring locally in the Harlech Dome area in Cambrian times.

In deeper parts of the Welsh Basin, in North Wales, more ‘distal,’ finer grained silts and muds formed the famous Cambrian age ‘Llanberis Slates Formation’, which is the key rock unit responsible for the hugely important Welsh Slate Industry in the Llanberis and Bethesda areas of Snowdonia (see Photo 9, showing steeply tilted shallow marine Upper Cambrian to Lower Ordovician sediments near Bethesda). The mining of these slates provided employment for thousands of workers in Wales in the 18th, 19th and 20th Centuries. 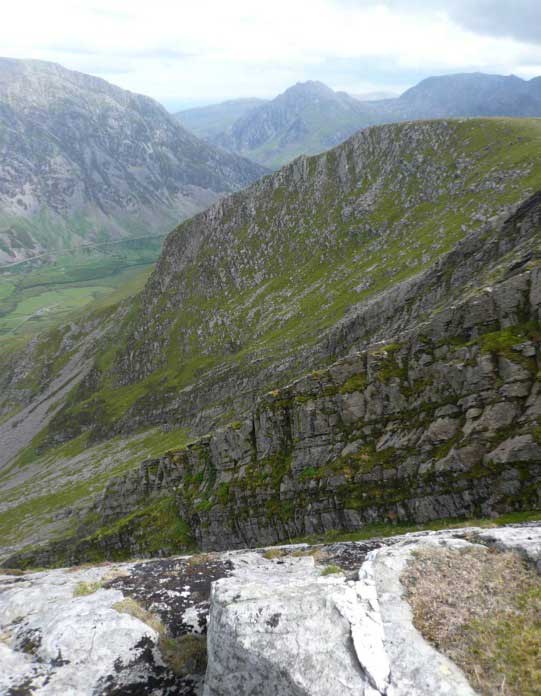 Photo 9, steeply tilted Late Cambrian to Early Ordovician sediments in the north face of Carnedd y Filiast, near Bethesda, Snowdonia. These rocks were originally laid down as submarine turbidites and shallower marine sediments within the Lower Palaeozoic Welsh Basin, but have now been tilted and folded by the Late Silurian to Early Devonian Acadian phase of the Caledonian Orogeny.
The mountains in the distance are mainly composed of younger, Ordovician volcanic rocks and interbedded sediments, which were also folded in the Caledonian Orogeny, although their final uplift to form the mountains we see today probably occurred much later in Mesozoic and T ertiary rifting events which led to the opening of the North Atlantic Ocean.

Cambrian age shallow marine ‘shelfal’ sediments were also laid down in south- west Wales, and these are also now beautifully exposed by later uplift and erosion in northern Pembrokeshire (see Photo 10, of Cambrian shelfal sediments taken near Porth Clais, just to the south of the small cathedral ‘city’ of St. Davids). 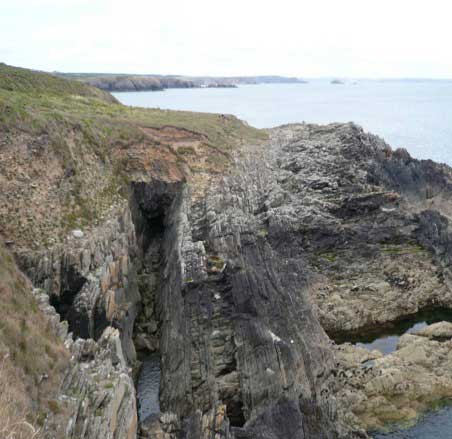 Photo 10, Cambrian shallow marine shelfal sediments, now tilted to an almost vertical orientation, Porth Clais, North Pembrokeshire. These sediments were probably laid down around the south-eastern margin of the Lower Palaeozoic Welsh Basin, but were folded and tilted by the Caledonian (and possibly also the later Hercynian/Armorican) Orogenies. It was the heat and pressure generated by these mountain building events that changed the Lower Palaeozoic mudstone rocks of Wales into low grade ‘metamorphic’ rocks known as slates.

All of these Cambrian rocks were originally laid down sub-horizontally, as individual sedimentary layers of sand, silt and mud, but both the Llanberis Slates of North Wales, and the Cambrian rocks of Pembrokeshire are now often tilted to almost vertical, or even overturned, due to the effects of the Caledonian Orogeny, and also, possibly, to additional folding, faulting and uplift in the later ‘Armorican Orogeny,’ in Late Carboniferous to Early Permian times.