May: The Devonian Period 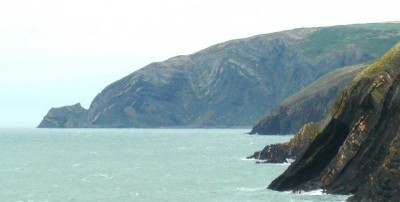 Photo 19. Spectacular folds at Ceibwr Bay, along the west coast of Wales near Cardigan. The rocks exposed here are actually Ordovician aged turbidite sequences composed of paler coloured sandstones and darker siltstones and mudstones. They were deposited in the Lower Palaeozoic Welsh Basin from sediment sources further south, probably in present day Pembrokeshire. However, the folding and faulting so spectacularly exposed here was produced by the collision between the Avalonian and Laurentian continents in the Late Silurian to Mid-Devonian Periods.
 

Throughout the Late Ordovician and Silurian Periods then, as mentioned on the previous page, the micro-continent of Avalonia had drifted north-westwards, after rifting away from the margin of Gondwana, probably in the Early Ordovician period. Further to the north-west, on the other side of the Iapetus Ocean, the ancient continent of Laurentia (which contained most of modern day North America, plus Scotland and north-western Ireland) continued to move south- eastwards, consuming the intervening Iapetus Ocean crust along its leading margin.

Eventually, in the late Silurian to mid-Devonian, the two land masses collided in a slightly ‘oblique’ continental collision. This collision eventually resulted in the elimination of the Iapetus Ocean, and nearly all of its underlying crust, which had separated the two land masses previously, and resulted in the crumpling and folding of the rocks and sediments on their now adjoining continental margins. The eventual ‘join’ or collision zone between the two continents is thought to lie somewhere along the present day Solway Firth area of southern Scotland, but in Wales its affects were mainly felt in the dramatic folding, faulting and heating of rocks in and around the margins of the collision zone, and resulted in extensive folding and uplift of Precambrian, Cambrian, Ordovician and Silurian rocks in Wales in what is now called the Acadian phase of the Caledonian Orogeny.

These dramatic folds and faults can be seen today throughout much of Wales (see Photo 19, showing spectacular folds at Ceibwr Bay, along the west coast of Wales near Cardigan, and Photos 20 and 21, showing much smaller scale folding in Ordovician sedimentary rocks near Rhosneigr on Anglesey, and even larger ‘mountain scale’ folding’ in the Cwm Idwal area of central Snowdonia). The heating and pressure effects of these huge compressional forces also ‘cooked’ much of the originally sedimentary ‘basinal’ mudstones and siltstone sequences of Wales, to form the thick, metamorphosed ‘slate belts’ of Wales and adjacent areas, which are famously exposed near Llanberis and Bethesda in North Wales, as well as at many other slate quarries in North, Mid- and south-west Wales. 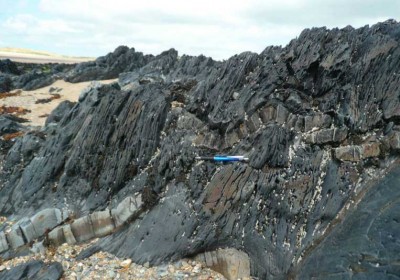 Photo 20. Small scale folding in Ordovician turbidite sequences at Rhosneigr, southern Anglesey. Again, the rocks themselves were actually deposited in a submarine environment in the Lower Palaeozoic Welsh Basin, but were crumpled, folded and uplifted to their present location in the Late Silurian to Mid-Devonian ‘Acadian’ phase of the Caledonian Orogeny. 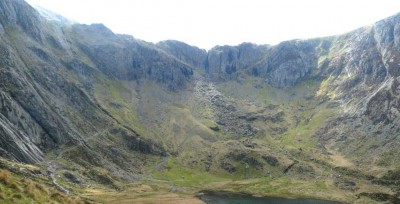 Photo 21. A much larger, mountain scale, synclinal down fold in Ordovician volcanic rocks and interbedded sediments at Cwm Idwal, Snowdonia. These thicker, more rigid rock units tended to form larger, more open folds when they were deformed by in the Caledonian Orogeny.