he Ordovician period was named after the ‘Ordovices,’ an ancient Celtic tribe who lived in Wales around the time of the Roman occupation of Britain. It forms the third major period of geological time, and contains rocks which were deposited between 488 and 443 million years ago.

Ordovician rocks begin to show that significant changes were taking place in the underlying continental crust of Wales, which initially lay close to the north-western edge of the Gondwanan super-continent at this time, at quite high latitudes in the Southern Hemisphere. Continuing, and perhaps more rapid south-eastwards subduction of the Iapetus oceanic crust was still occurring beneath this margin of Gondwana (a process which may have commenced as early as Late Precambrian times) and eventually this subduction process generated large quantities of magma from the melted oceanic crust. This molten magma material began to rise to the surface through cracks in the over-riding continental crust of Wales and began to break the crust apart, eventually forming a deeper and more extensive ‘back- arc’ basin across what is now much of central Wales (the ‘Lower Paleozoic Welsh Basin’). This process of ‘back-arc rifting and spreading’ eventually rifted the underlying continental crust of Wales away from the north-western margin of Gondwana to form part of a separate ‘micro-continent called ‘Avalonia’, probably in the Early Ordovician period. ‘Avalonia’ then began to drift north-westwards across the Iapetus Ocean.

This rising magma produced chains of volcanoes across North Wales, Pembrokeshire and the English Lake District to the north-east, many of which seemed to be located above fracture zones generated by stretching and rifting of the underlying crust. These volcanoes erupted huge volumes of volcanic ash and lava, forming the thick volcanic rock sequences which are now so spectacularly exposed in the mountains of Snowdonia, as shown on the Calendar’s front cover photo, and in more detail in the photos of ‘pillow lavas’ and ‘vesicular lavas’ near Strumble Head in northern Pembrokeshire (Photos 11 and 12).

Photo 11. Ordovician ‘pillow lavas’ near Strumble Head in northern Pembrokeshire. These lavas were erupted onto the Ordovician sea floor, where they cooled very quickly in the surrounding cold water to form rounded, lumpy, pillow shaped structures. 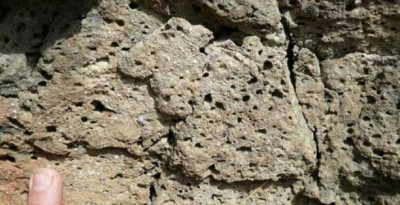 Photo 12. Ordovician ‘vesicular lavas’ near Strumble Head, northern Pembrokeshire. The ‘vesicles’ or bubbles in the lava were formed when gasses trapped within the lavas expanded as the lava reached lower pressure conditions near the Earth’s surface.

Large bubbles of molten magma pushed up through the crust from below to supply lava to the volcanoes, but some of these magma bodies failed to reach the surface, and cooled and solidified in place to form ‘batholiths,’ ‘dykes’ and ‘sills’ beneath the surface. Some of these intrusions were eventually revealed by later uplift and erosion, and now form resistant granite, gabbro, rhyolite and dolerite bodies, which produce several steep, residual hills in northern Pembrokeshire (as seen in Photos 13 and 14). They also occur in Snowdonia and on the Lleyn Peninsula (Photo 15, which shows the Ordovician granitic intrusive ‘batholiths’ of the Yr Eifl Hills near Morfa Nefyn on the Lleyn Peninsula) where they have again been exposed by later uplift and erosion. 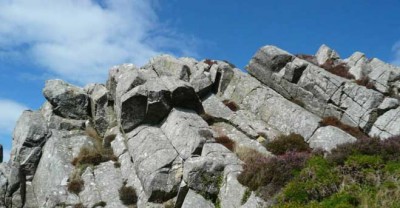 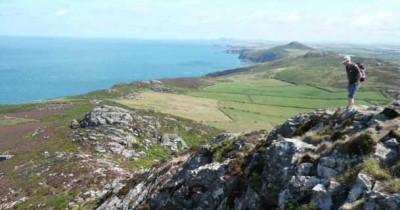 Photo 14. An Ordovician age gabbro ‘sill’ intruded into the ‘background’ Ordovician marine sediments in Carn Llidi hill, near St. Davids, northern Pembrokeshire. These dykes and sills may have formed the feeder pipes for nearby volcanoes.

However, significantly, many of the simultaneously deposited Ordovician ‘background sediments’ which continued to enter the Welsh Basin from land areas to the south, east and north, still accumulated in the basins around the volcanoes and were preserved as Ordovician mudstones and siltstones, although many of these have now been changed to slates by the heat and pressure generated by the Late Silurian to Early Devonian Acadian phase of the Caledonian Orogeny. These relatively soft mudstones, siltstones and slates now often form the more subdued topography of valleys and ‘cols’ between the ridges and rocky cliffs formed by the more resistant Ordovician volcanic rocks in Snowdonia, as can be seen in the photo on the front cover. For the same reasons, they also often form bays and inlets in Pembrokeshire, Anglesey and the Lleyn Peninsula, whilst the harder igneous and volcanic rocks often form the intervening headlands and cliffs.

Photos 15. Intrusive Ordovician granite ‘batholiths’ of the Yr Eifl Hills near Morfa Nefyn on the Lleyn Peninsula, North Wales. These igneous rocks were originally emplaced as molten magma bodies which rose up beneath and within the Ordovician volcanoes, but then cooled and congealed in-situ and therefore didn’t reach the surface as lava or volcanic ash. They have only been exposed at the surface later, by subsequent periods of uplift and erosion, probably in the late Mesozoic and Tertiary periods, when western Britain suffered uplift, rifting and faulting associated with the opening of the North Atlantic Ocean.