By the Permian period (299-245 million years ago) Wales had become part of the large, composite ‘Laurussian,’ and subsequently the ‘Pangean’ landmasses, which consisted of the original North American ‘Laurentian’ continent to the north- west, plus Russia and Scandinavia to the north-east, and then the addition of the now collided Gondwanan continent (composed of Africa, India, Antarctica and South America) to the south.

However, in later Permian times (and continuing through the later, Triassic, Jurassic, Cretaceous and Tertiary Periods) the crustal stress regime within Pangea (and within Wales) began to change. As the northward directed pressure of the Gondwanan continental collision began to relax, a new zone of largely east- west directed crustal extension began to stretch and fracture the continental crust of north-west Europe. This east-west crustal extension was the early stages of the opening of the North Atlantic Ocean basin, and led to the development of a series of mainly north-south oriented ‘rift basins’ including the Vale of Clwyd ‘half- graben’ basin, the Cheshire and Worcester basins in England, and their northward continuations into the East Irish Sea Basin off-shore. Another series of similar rift basins, the St. Georges Channel and Central Irish Sea Basins, also developed off-shore, out to the west of Wales.

Due to the amalgamation, and continued northward drift of the Pangean landmass across the globe, Wales was now located within the large continental landmass, and sat in relatively low ‘northern tropical desert latitudes’, at about 30 degrees north of the Equator, probably in a similar latitude to today’s Sahara desert. As a result the climate of Wales was predominantly hot and arid, with only infrequent flash floods or more distant river inputs entering the desert landscape from the distant Hercynian/Variscan/Armorican Mountains in the south. This led to the widespread deposition of thick, cross-bedded and red, iron oxide stained, sand dune deposits, with local fluvial sands, gravels and muds, in the Vale of Clwyd basin in north-east Wales and in the Cheshire and East Irish Sea basins (see Photo 28, which shows thick, dune bedded, iron oxide reddened, desert sandstones in road cuttings near Ruthin, in north-east Wales, and Photos 29 and 30, which show close up views of similar dune-bedded sandstones).

Photo 28. Thick, dune bedded, iron oxide reddened, desert sandstones in road cuttings near Ruthin, in north-east Wales. Structures like this formed large areas of sand dunes across north-east Wales and the Cheshire Basin through much of Permian and Triassic times, when Wales was located in the low latitude desert belt within the large super-continent of Pangea, perhaps in a similar setting to the deserts of North Africa today. Porous and permeable, thick dune-bedded sandstones like these also extend to the north and west, beneath the eastern basin of the Irish Sea, where they were filled with hydrocarbons from the older, organic carbon rich Carboniferous age Bowland and Holywell shales.

Photo 29. Close up view of dune-bedded Permo-Triassic sandstones from the Ruthin area of north-east Wales. The loose, poorly cemented nature of these sandstones is illustrated by their crumbly, friable texture. It is this texture which has allowed similar rocks to form oil and gas reservoirs further north, in the East Irish Sea Basin, just of the North Wales coast. 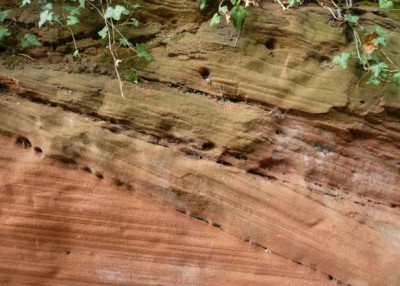 Photo 30. Another close up view of the internal structure of dune-bedded sandstones near Ruthin, north-east Wales. A variety of cross-cutting erosive surfaces can be clearly seen in this image (picked out by the lines of holes). These represent several super-imposed sand dune sequences as the wind direction changed over time, producing localised erosion of some sand dunes, and then later re-deposition of new sand layers.

It is the deposition of similar thick, relatively well sorted, and mostly poorly cemented sandstones like these (and later, similar Triassic sands) that formed the reservoir rocks for the oil and gas fields in the East Irish Sea Basin, some of which is now piped on-shore to the Point of Ayr terminal, near Prestatyn in North Wales. The deeper parts of these extensional basins often contained saline desert lakes, perhaps like the Great Salt Lake and Lake Eyre Basins in today’s desert zones of North America and Australia, and these often accumulated great thicknesses of lacustrine or restricted marine sands, silts, muds and evaporites in the Permian and Triassic periods. The latter lithologies now frequently act as salt or mudstone ‘seals’ to the oil and gas reservoirs of the East Irish Sea Basin, and form thick salt deposits which are mined as ‘rock salt’ from beneath the Cheshire Basin.

In South Wales there are now no known Permian deposits preserved at the surface on land, and most of South Wales was probably still uplifted, as part of the Wales-Brabant landmass or as part of the northern margins of the Variscan/Armorican mountain belt. To the south of Wales, the Central Somerset, Bristol Channel Basin and South Celtic Sea Basin opened up more along more east-west or north-east to south-west orientations, and these also began to fill with largely reddened deposits of sands, silts, muds and marls, probably in a semi-arid or arid climate. In the Celtic and Irish Seas, and in the Bristol Channel area similar deposits may also form potential reservoir rocks and seals for oil and gas accumulations, although these are yet to be realised.